The 2015 vintage has been heralded from inception as remarkable and the in-bottle scores confirm this, Perrotti-Brown says ‘2015 is an extraordinary vintage for the communes of Saint-Émilion, Pomerol, Fronsac, Graves and Pessac-Léognan.’ Suckling follows suit ‘After tasting about 1,300 Bordeaux 2015 in France, my team and I concluded that the 2015 vintage has lived up to its great potential in every sense of the word’. As does Dunnuck, ‘In fact, Saint-Emilion and Pomerol have produced an incredible amount of outstanding wines that are on par with what was achieved in 2009 and 2010, both being extraordinary vintages.’ There can be little doubt that 2015 is a true great and interestingly, it is trading at a discount to the 2000, 2005, 2009 and 2010 vintages.

Of the potential 98-100 scoring wines from the original WA barrel report, last night’s report has culminated in three perfect 100 point wines, making them no brainers for investment. The perfect scoring wines are: Haut Brion, Cheval Blanc and Petrus. This offer will focus on the first two. In addition, notable winners, who were marked above their initial range are: Belair-Monange, which received 98+, Haut Bailly 97+, Violette 96+ and Ducru Beaucaillou 97. Ausone, Le Pin, and Margaux were awarded 99 points, the latter, which has seen huge secondary market trading has not received a perfect score. Mouton Rothschild, Palmer, La Mission Haut Brion, Pavie and Latour received 98 points. There are many other glittering scores, which we will cover. However, we have spent last night and this morning securing parcels of the must-buy investment wines and are excited to feature today Haut Brion and Cheval Blanc 2015. These are released today at superb market prices and are set out to be carried by the wave of points repositioning over the coming weeks.

The Cheval Blanc’s rescore has exceeded the bracketed score previously awarded to the 2015 vintage. This has caused an upward shift in the expected market price. It is reasonable to expect the Cheval Blanc 2015’s new price to settle around that of the 2005 at £6,850. However, we can also imagine the 100-point vintage to outperform the trend, as seen in the 2010 vintage, and settle with a new market price of around £8,550. (graph below) 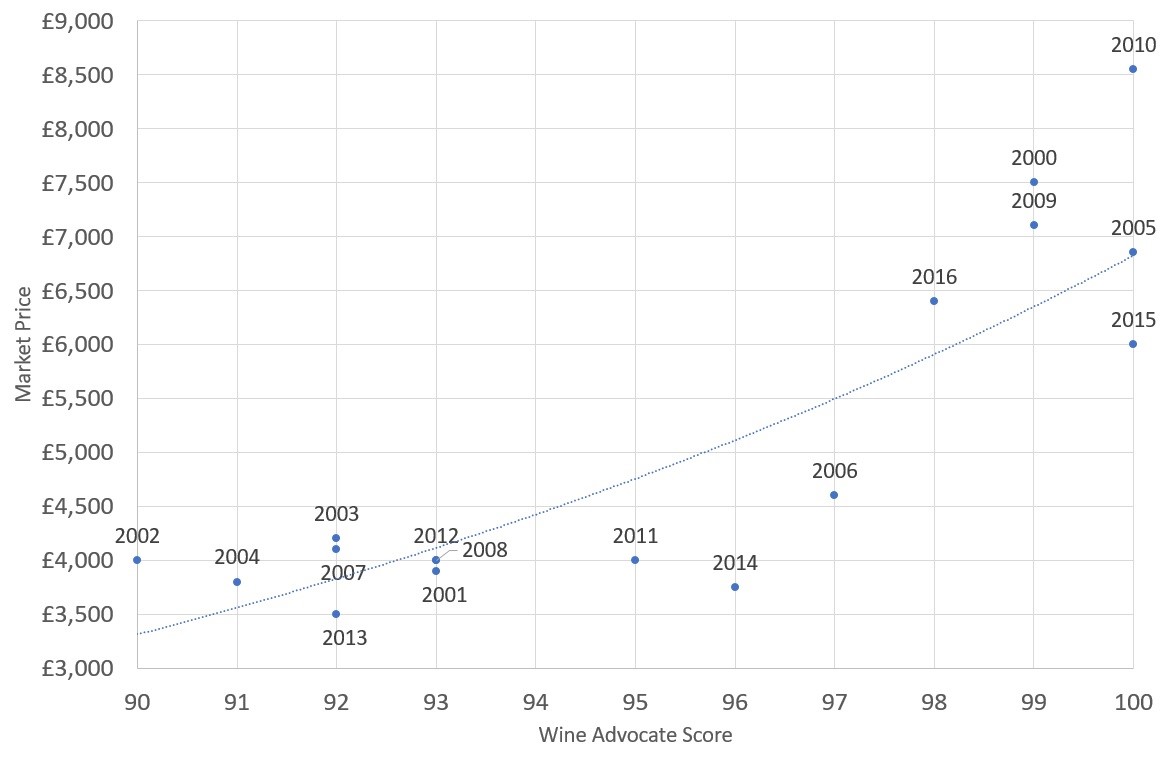 When we first tasted Haut Brion 2015 from barrel at the Estate there was no hesitation in giving it a perfect score, Haut Brion 2015 is remarkable, one of the greatest ever vintages from the Estate. It was originally awarded 98-100 from the Wine Advocate. We dared to compare it to the 1989, one of the greatest wines ever made, Perrotti-Brown states in her tasting note: ‘While it bears only a passing resemblance in its opulent personality to the now legendary 1989, like that vintage the 2015 cannot fail to hedonically satiate and intellectually edify all lovers of great Bordeaux who drink it.’ If you want a truly great wine to drink and enjoy for decades, buy this!

With its rescore, Haut Brion 2015 has realised the top of its 98-100 point bracket. Using past vintages to determine the natural market price of various scoring Haut Brion vintages, we can surmise that the new 100 point score will cause the 2015 vintage to shift upward toward the trend, indicating a price of approximately £5,750. However, all other 100 point scoring vintages have exceeded the trend as observed in the 2005, 2009 and 2010 vintages. Therefore, the 2015 vintage’s adjusted market price may settle around £6,500-£7,000. 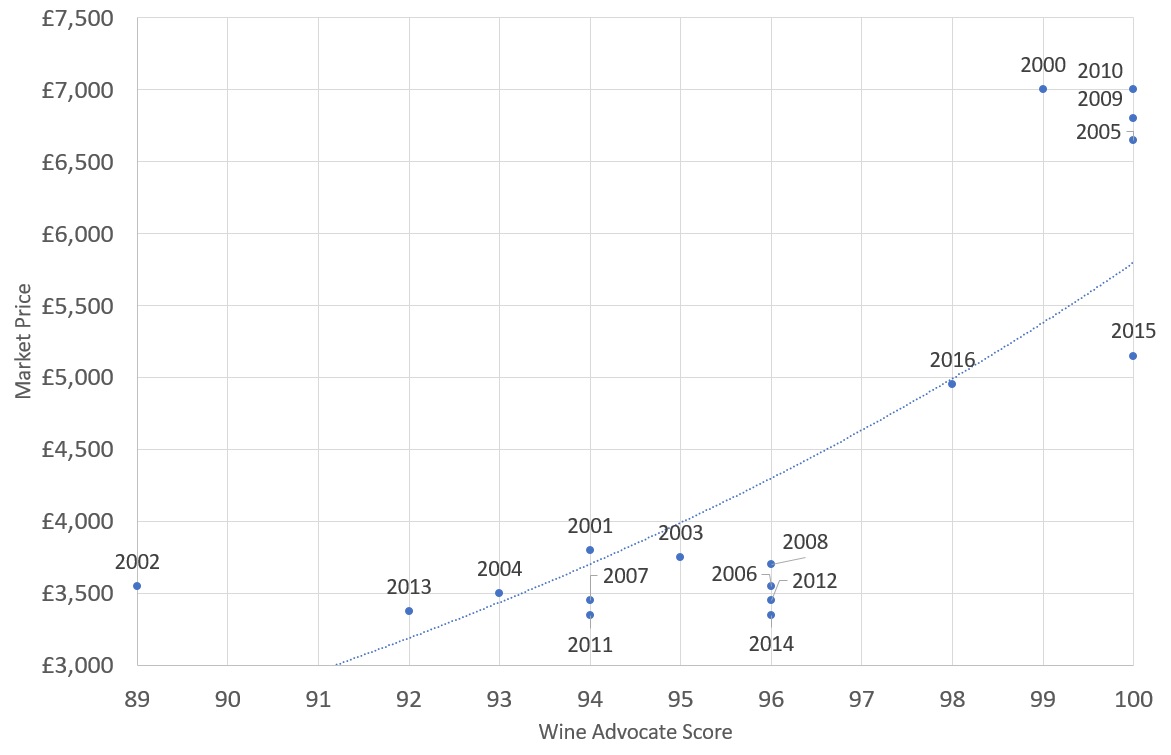 Profit-Taking
There is always a dark side of the moon to any superb vintage, which unfortunately leaves some wines not attaining the high band of their score. However, the gains which they would have accumulated since their En Primeur release are significant and we believe this will be the ideal time to profit take. Among these wines is most noticeably Canon, which received a solid 96 points. The returns for this rising stellar wine have been immense since its release; with a release price at £650 and today’s market price hovering around £1,750, it has seen an astonishing 169% profit. However, since it missed out on a perfect score, we believe that this is the opportune moment to sell out and cash in for £950 profit, we buy at £1,600 per 12×75. Another wine which has fallen just short of its high expectations is Figeac. Figeac has received a solid 97+ points which would more than gratify any Bordeaux growers. It is actually their highest scoring vintage ever after the 98 pointer 1949 vintage. The market is aware of this which is why it has appreciated 73% since its £1,100 release price, with cases currently trading at £1,900. However, we believe that the exponential growth for this wine will slowly dip and let more potential for the new 2016 vintage which is predicted a potential 100 points we buy at, £1750 per 12×75.

We strongly recommend Cheval Blanc and Haut Brion 2015, which we have in small quantities as six and 12 bottle cases. They promise to reward greatly as an investment and will become remembered as two of the greatest ever wines from Bordeaux.

Haut Brion 2015, 100 Points, Lisa Perrotti-Brown
A blend of 50% Merlot, 8% Cabernet Franc and 42% Cabernet Sauvignon, the medium to deep garnet-purple colored 2015 Haut-Brion is reticent to begin, languidly revealing crushed black cherries, ripe black plums and wild blueberries with sparks of cinnamon stick, cloves, nutmeg, espresso, unsmoked cigars, tapenade, crushed rocks and lavender. The full-bodied palate possesses wonderfully complementary contrasts of bold black and blue fruit richness and delicately nuanced cherry fruit, baking spices and floral accents, strutting ripe, finely pixelated tannins and seamless acidity that is placed firmly in the background, finishing very long and with plenty of attitude. This impeccably poised, exquisitely perfumed 2015 Haut-Brion possesses the most alluring yet seemingly effortless beauty. While it bears only a passing resemblance in its opulent personality to the now legendary 1989, like that vintage the 2015 cannot fail to hedonically satiate and intellectually edify all lovers of great Bordeaux who drink it. What’s more, it also has the blue-blooded tenaciousness to remain this jaw-droppingly impressive, throughout its many guises over time, and for a very, very long time.

Cheval Blanc 2015, 100 Points, Lisa Perrotti-Brown
As many readers may know, 2015 was the first year since 1988 that Cheval Blanc did not produce its second wine, Petit Cheval. This said, parts of two of the Cheval Blanc blocks were not used at all—Plot 17A and the north part of Plot 10—which had problems with water availability during the dry spell, and the fruit was sold for bulk. Therefore, this vintage of the Grand Vin equates to roughly 90% of the total production, making it one of the most complete expressions of Cheval Blanc ever produced. Composed of 53% Merlot and 47% Cabernet Franc, the deep garnet-purple colored 2015 Cheval Blanc slowly opens up to reveal plum preserves, black forest cake, blackberry pie and pronounced licorice notes with suggestions of cloves, cinnamon stick, star anise, dried Provence herbs and lavender plus wafts of iron ore and dusty soil. Medium to full-bodied, rich and densely packed with incredible layers of black, red and blue fruits, it completely fills the palate with energy and expression, framed by very ripe, wonderfully velvety tannins and a racy line of acid, finishing with incredible length and poise. At once achingly graceful and captivatingly cerebral, this is a legendary vintage for this great estate. 100 points, Lisa Perrotti-Brown