Chateau Trotanoy was a favourite of Robert Parker, who has now retired from tasting Bordeaux en primeur. His successor at the Wine Advocate Neal Martin, not only carries the banner for Trotanoy, but his passion and admiration for it perhaps exceeds Parker’s. While Petrus is the acme of Pomerol and perhaps the whole of Bordeaux, Trotanoy is close behind, ageing no less gracefully and by Martin’s admission “Venerable, legit Trotanoy is extraordinarily hard to track down, I would say more difficult than Pétrus and perhaps even Lafleur… and before you ask, no, there is bugger all in the château’s reserves.” In fact, Trotanoy’s vineyard is 7.2 hectares, planted 90% with Merlot and 10% Cabernet Franc, with an annual production of 25,000 bottles which is less than Petrus. Martin goes on to say that “When I asked proprietors which Pomerol they most admired, the most common answer was not Pétrus nor Lafleur, but Trotanoy…it became apparent that they viewed this address as the quintessential Pomerol, the benchmark by which many of its neighbours aspired.” However, the good news in the short-term is that it remains undervalued compared to Petrus and Lafleur. As such, we are always on the lookout for well-priced parcels and in particular the 2014 vintage, which is undervalued among the leading vintages of Trotanoy. Today we have managed to source a parcel we can offer.

In 2014 Trotanoy has been awarded 97 points by Neal Martin, he muses ‘Best Pomerol of the vintage? The only thing wrong with that last sentence is the question mark at the end.’ Trotanoy is in fact the red wine of the vintage, besting the First Growths, Petrus and Lafleur. The latter two are priced at £12,500 and £6,000 per case of 12, we can offer Trotanoy for £1,750 per case of 12 or £875 per case of six. As such, Trotanoy performs brilliantly horizontally against its peers and when compared vertically to other Trotanoy vintages, it is also exceptional. The table below represents all vintages of Trotanoy with 96 points or above. The 2014 vintage equals the 2009 and surpasses the 2010, which trade at £2,900 and £2,200 per case respectively. It has the lowest Price Over Points ratio, with a 66% discount to the ratio of the 2009, 34% to the 2010, with an average of 69% POP discount to the other vintages. This is a remarkable piece of market mispricing.

The 2014 release of Trotanoy presents potential investors with an interesting opportunity. When comparing the Wine Advocate scores and market prices of past releases dating back to 1982, a trend develops. It can be observed that the 2009 and 2016 vintages have both received the same 97 point score as the 2014. This is a good indication of the market price the 2014 will occupy once adjusted to its natural rate. Today’s release price of £1,750 presents a discount of around £850 to the projected market price and an average disparity of £1,000 to the 2006 and 2009. This indicates that early investors will be handsomely rewarded as the price adjusts. 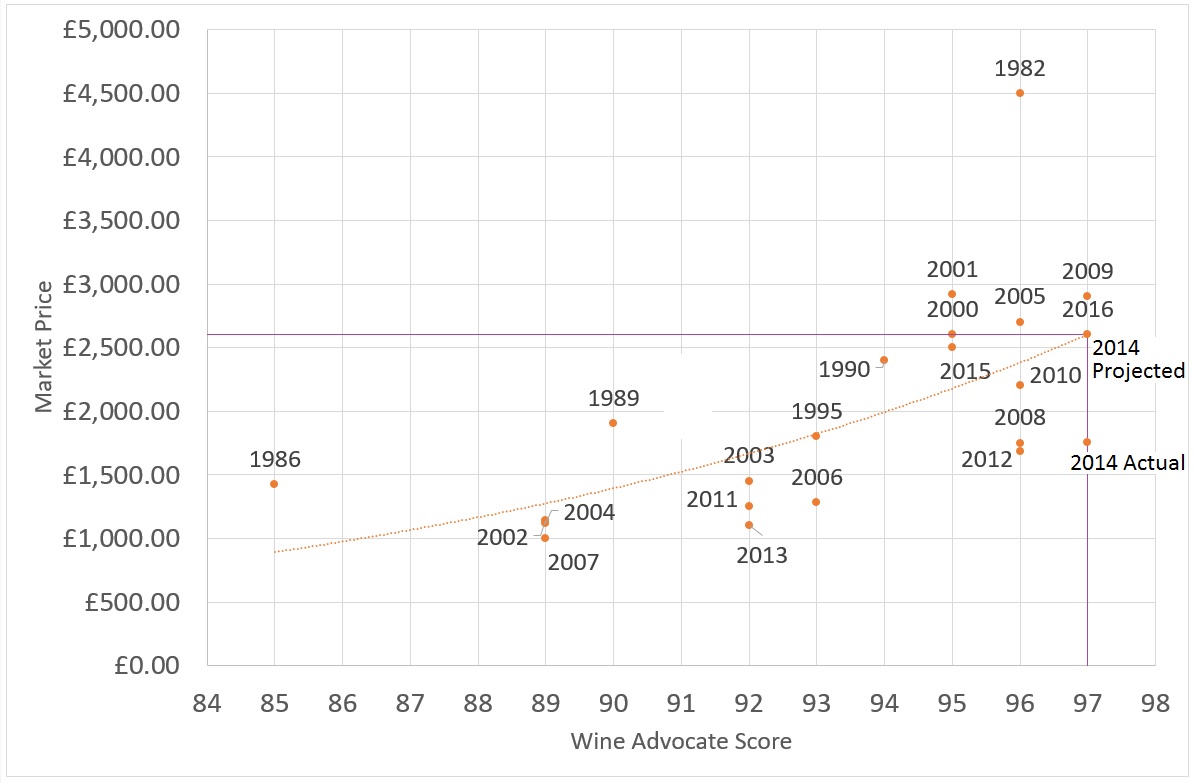 Chateau Trotanoy garnered acclaim under its former name Trop Ennuie, which makes reference to the soil being hard to cultivate. It was first planted in 1761, owned through its infancy by the Giraud family. Trop Ennuie can be translated along the lines of ‘too much to bother with’ largely referring to the terroir that defines it today, made up of rich clay and gravel soils, with subtle deposits of iron. It is situated near Petrus, Lafleur, with Le Pin to the south east and Hosanna to the north. Its best terroir is found on the Pomerol plateau, with other fragments found on surrounding slopes. The average age of the vines range from small parcels of 25 years, (owing to some replanting) combined with older vines that are around 60 years of age. In 1953 the vineyards were bought by the owners of Petrus, Jean-Pierre Moueix, from the Pecresse family who were direct descendants of the Giraud’s.

Trotanoy  boasts a unique purity of fruit, combined with subtlety and balance. The wines see 40-50% new oak for 18 months in barrel. Great vintages of Trotanoy, taken on empirical evidence, last 70 years in the bottle. In terms of investment Trotanoy has mechanics in its favour, global acclaim, short supply and true pedigree. The 2014 is a must buy for investment or future consumption.

The 2014 Trotanoy had (que surprise!) closed down on the nose compared to its JP Moueix stablemates. A few swirls of the glass and it reveals very precise, mineral-soaked black fruit laced with black truffle and subtle sous-bois aromas. It soon gathers momentum and the aromas were gaining more and more intensity after five minutes. The palate is outstanding. There is brilliant structure here, immense and almost staggering purity, incredible focus and tension with an electrifying spiciness on the finish. Best Pomerol of the vintage? The only thing wrong with that last sentence is the question mark at the end.